Recently I came across a customer that has Aruba Instant APs (IAP) that they wanted to selectively broadcast SSIDs throughout the deployment. On an Aruba controller environment, this was something that most everyone knows how to do. You could build out multiple AP groups with only the needed SSIDs selected in the VAP profile, or use the AP specific commands to add the SSID. However, in an IAP environment this wasn’t something that I had ever had the need to do. After some research and testing in my lab, I found out that the steps to accomplish this were relatively easy.

Below is an example of how to do this using the Aruba IAP platform.

Hotel customer has a “Public” network they want to broadcast in the hotel lobby, but wants to broadcast a “Private” pay-as-you-go network in other areas like hotel rooms.

Within the IAP architecture, Aruba has implemented a “Zone” feature that is configurable in both an Airwave managed IAP cluster and non-Airwave managed cluster. The purpose of this feature is to allow selective broadcast of SSID within an IAP deployment. It functions by only allowing a configured SSID to broadcast on IAPs that have matching zone configuration. 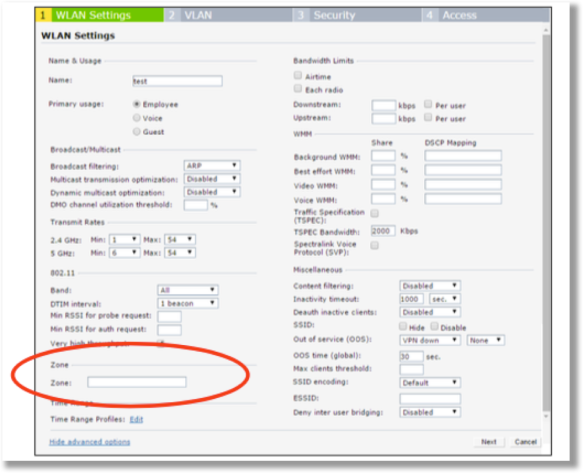 The following constraints apply to the zone configuration:

Good luck building your configs and if you have any questions let me know!